Should BECE mark the end of JHS Education?

The national examination, the Basic Education Certificate Examination (BECE), taken at the end of the second term of the final year of basic education, focuses on selection of few above average students who qualify to offer general/academic programmes at the Senior High School (SHS) level. The so called “pass” in BECE, defined as gaining an aggregate range of 6-30 in the best six subjects with a grade 5 or better in the core subjects (i.e. Mathematics, English, Integrated Science and Social Studies), has clouded the purpose of the examination making people to inadvertently use it to label the majority of students who complete JHS as failures even though no one fails by the standards guiding the BECE.

Presently due to the limited number of entrants that SHS can absorb, less than half of JHS leavers who qualify obtain places. While some of these JHS levers find themselves in the few prestigious SHS, the remaining majority, who also qualify by the standards of the examination, find themselves in inferior senior high schools doing less-academic or technical/vocational programmes. JHS leavers who enter the latter institutions together with all the others who enter into apprenticeship are labeled failures even though their certificates indicate that they have passed the BECE.

In this light, qualifying for SHS does not necessarily mean the student can gain admission to SHS, since the latter depends on many factors including places presently available in high schools chosen, proximity to where parents live, programmes offered by school, parents’ ability to fund, etc. Junior high schools therefore need to have records on students qualifying but not gaining admission to SHS in order to plan with the community ways to continue to support such young students till they attain the official employment age. Such a process can begin in the third term of the school year after the students have sat the BECE if they remain in school till end of the year.

The question is ‘what does the education system offer in terms of advice or counseling to these young students especially those for whom the JHS education is their terminal formal education?’ What we often see in most public schools today is that the system has inadvertently made JHS education to terminate with the sitting of the BECE. It is rather unfortunate our youths’ basic education ends this way because the basic education curriculum demands that the students learn a lot more things that are important but not covered by BECE. The last three months of the statutory period for basic education can be used in teaching such significant curricula areas as

In some private institutions, which house both the junior and senior high schools, the sitting of the BECE does not mark the end of JHS. The students remain in school preparing for the next level in the third term.

As a result of the 2007 review of the basic school curriculum, what used to be called Continuous Assessment (CA) had been overhauled to make assessment more comprehensive and renamed School-Based Assessment (SBA). Though SBA requires that JHS students do projects and be assessed in the significant curricula areas, the West African Examination Council (WAEC) continues to accept assessment records based on the outmoded CA for grading students. In other words, WAEC has been too slow in accommodating the new assessment reforms into its international assessment policies and guidelines.

One major advantage of the SBA, which many tend to ignore, is that the final term of the JHS and SHS programmes can be used for problem/project-based teaching so that students can carry out projects. At the moment many teachers are of the view that the duration for JHS and SHS education is inadequate to complete the overloaded syllabi. Besides, we are all aware of some of the misfortunes that beset many of the girl-students because of the long period they have to be at home waiting for their results. Many girls get pregnant in this process and are forced out of education. If the third term in the final year of basic education is devoted to a final project task set by the school or WAEC, then students will have the opportunity to remain in schools for the entire period of their basic education and SBA can focus on developing those significant learning objectives usually ignored in time limited paper-and-pencil tests such as the BECE. It is therefore high time the Ministry of Education comes out with a policy that will ensure all Ghanaian children take full advantage of the government’s free 3 years (and not 2⅔ years) of JHS education. Finally, since there are no failures in BECE, the general public, especially politicians, should be cautious in their pronouncements about BECE results, particularly where they interchange the words ‘qualify’ and ‘pass’.

Accra, May 15, GNA – Mr Samuel Oppong, National Coordinator of Computerised School Selection and Placement System (CSSPS), on Tuesday said results of the 2012 Basic Education Certificate Examination (BECE) would be ready by July 30 for placements in August.

He said the list of all successful candidates and their schools would be submitted to the Regional and District Education Directorates, Senior High Schools (SHS), Technical and Vocational Institutes and Junior High Schools (JHS).

Mr Oppong was briefing the Minister of Education, Mr Lee Ocran, during a familiarisation visit to the Secretariat and inspect on-going projects as well as have a fair idea about how the placements were done.

Mr Oppong said the CSSPS since its inception in 2005 had worked to improve upon the manual system of selection and placement of qualified BECE candidates into public and private SHS, technical and vocational institutes, by using the total processed raw scores of six subjects instead of grades, by candidates for selection.

However, he said the Secretariat faced some challenges, including the non-acceptance of placement of results, inaccurate data provided by candidates during registration by the West African Examination Council, and lack of parental participation in the registration of their children.

The choice of school without reference to parent's financial preparedness, and availability of boarding facilities and programmes as well as parents' insistence that their children should be placed in their first choice schools were some of the challenges facing the Secretariat.

He noted that it had however, introduced school digest to advertise all SHS and T/VI , continued training of CSSPS frontline implementers, continued and intensified public education about activities of the CSSPS .

Mr Oppong said: “We have arranged with WAEC to release results to the general public and CSSPS Secretariat at the same time in 2012”.

He assured the Minister that the Secretariat was working round the clock to ensure that the 2012 selection and placement come out successful and on time.

Mr Ocran commended the Secretariat for their performance over the years to ensure success of the system since its inception in 2005.

He emphasised that the system had been transparent over the years and in the interest of all, and urged parents to understand and accept their children's placement in schools.

Mr Ocran urged the Secretariat to initiate a programme that would make parents have access and the opportunity to visit the Secretariat and observe how the placements were done, in order for them to clear all forms of misconceptions about their operations. 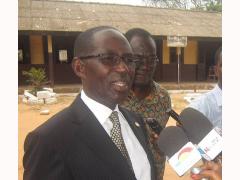 American children are at risk, toms shoes inadequate training of dentists who often seek to calm even routine dental cleaning and endovascular treatment of young patients, in order to increase toms classic shoes profits, ABC News survey found. After more than 10 children have died dentist sedation, according to Crow, Maria Blanco Foundation, mens toms shoes aims to remind parents as young as 18 months in patients with oral sedatives increasingly widespread use of potentially dangerous. Countries to the United States womens toms shoes, University of Illinois, Dr. Indru Punwani, pediatric dental school spokesman said a weekend course, toms shoes classic is "inadequate" and prepared to handle emergency situations through the use of one for one shoes oral sedatives dentist. The program booklet, a single dose of calm, of course, said: "Give us three days, we will teach you the agreement of toms mens size both adults and children - Services from the age of patients in the 5-95 - you can take home and immediately implemented." In itsbrochure, the program also recommends, but toms womens shoes does not require the dentist are also registered in a separate "pediatric Advanced life Support" course.

However you don't must experience any one of this strain and frenzy because it possible for you to tackle your own anti-aging skin care evaluation and understand how to locate a skincare product range -- an anti aging Skin Care Tips program in-fact -- that will help replenish your skin delicately and naturally and give it a number of that youth you used to possess.

Through the use of products which might be formulated for your skin-type, you attain perfect advantages from that formula and will minimize outbreaks. You should also ensure your products' love, and thus cosmetic additives are useless from their website.

I have even gotten a number of pals to start on Energy Slim with Acai and enjoy the product. There all for this and ready to lose the excess fat they obtain ready for summertime and have! It's really much more and a lot better better then an additional products that claim to be allnatural. I've read a lot of good stuff concerning Acai's benefits. I'm not so sad that I also have observed such outcomes that are wonderful and tried the product!

Total Calories. You should not be unaware of the total calories you are consuming everyday and where these calories are currently via. Don't think you realize. Begin retaining a newspaper of precisely what you consume having a break down of the macronutrient content. This is actually the Best Bodybuilding Supplements way to ascertain precisely what your whole calorie content is. You've to take throughout your day to provide the human body with a continual number of vitamins in enough calories.

Permalink Reply by A on December 1, 2015 at 5:41am
The periods in my life where Stuart Weitzman Canada for one reason or other, I was looking stuart weitzman canada for a job, It's my job to found sw Boots the lure involving work at home Stuart weitzman uk jobs tempting. The project at home jobs stuart weitzman australia that were almost all readily availableMichael Kors Canada were either hoaxes or they costAuthentic Air Jordans for sale more to complete than you could Retro Jordans 6 make. The best home work jobs were hardWholesale Jordans free shipping to find or maybe they required jordan shoes store skills that we just did not have.

This true passion authentic air jordans and dialling is churchAuthentic Jordans 13 for sale ministry, which often in my Cheap Jordans free shipping case has transferred me across the north face vest the country a couple of times. This also, until recently Wholesale Jordans free shipping did not shell out at all. That meant I had fashioned to find some air jordan shoes for sale regular paying out job that was Wholesale Ray Bans flexible plenty of to let meOakley Sale do this church ministry.