what is the earth made of 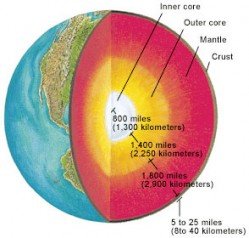 Look down beneath your feet. Have you ever wondered what you’re really standing on? What is the Earth made of?

If you could take the entire planet, sort it out into its various elements into piles, you’d have the following: 32% iron, 30% oxygen, 15% silicon, 14% magnesium, 3% sulfur, 2% nickel, and then much smaller piles of calcium, aluminum, and other trace elements.

Obviously, we don’t breath an iron atmosphere or swim in oceans of silicon. The elements of Earth are layered in the planet.

We live on the outermost layer of Earth, called the crust. This varies in depth between 5 and 75 km. It’s mostly made of silicates, with a tremendous amount of oxygen mixed in. In fact, 47% of the Earth’s crust is oxygen. The thickest parts of the crust are under the continents, and the thinnest parts are underneath the oceans.

Beneath this crust is the mantle, which goes down to a depth of 2890 km. It’s the largest layer on Earth, and mostly consists of silicate rocks rich in iron and magnesium. Volcanoes are places where this mantle wells up through the crust.

Below the mantle is the core, which is broken up into two parts: a solid inner core with a radius of 1,220 km, and then a liquid outer core that goes out to a radius of 3,400 km. Scientists think that the core consists mostly of iron (80%), which pulled together into the middle of the planet during the formation of the Earth, 4.5 billion years ago.