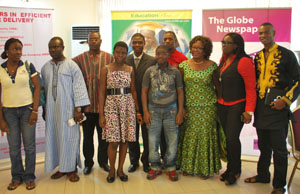 CITI 97.3 Fm has held a ceremony at the Coconut Grove Regency Hotel in Accra to launch the its fourth annual  children’s essay writing contest code named “Write Away  Contest 2012.”

The theme for the 2012 essay is a story with the writer’s own characters that ends with the idiom, ‘Rome was not built in a day.’

Presenting her pre-launch speech, retired and renowned educationist, Amy Awoonor described the Write Away Contest  as a golden door opened to children to dream and break out of the dangerous cycle of ignorance and academic poverty.

She continued that the Citi Fm Write Away contest is a laudable intervention to their rescue and called on all parents to encourage their children to take part in writing the essay.

She noted that children who grow up in a culturally impoverished background are likely to lack diversity and creativity in their word bank and that their thoughts are largely stifled and muted because they are unable to express them convincingly.

A press release announcing the contest said the Write Away Contest is open to all children between the ages of 10 and 14 years.

It mentioned that entries presented must be original creations containing at least 600 words in the writer’s own handwriting duly signed by his/her parent or guardian.

All completed entries must be mailed to P.O Box 14123, Accra Central or delivered by hand to Citi Fm’s offices located behind Adabraka Police Station in Accra.

The deadline for submission of entries is August 3, 2012 and winners will go on an all expense paid one week trip to Cape Town, South Africa.